The very first library in Clinton, Missouri opened in September of 1927. It was created by the Women’s Civic Club and resided in the local courthouse. The library moved in 1939 to the former McClane House which burned down in 1944 prompting the library to temporarily reside back in the courthouse before moving to the Livingston Building on East Jefferson. On April 2nd, 1946 the library officially became the Henry County Library. The library then moved to 123 East Franklin in May of 1950 where it stayed for 44 years. The current Henry County Library Main Facility, as it is known today, opened on April 25th, 1994 on 123 E Green St. It is 17,740 square feet and is open 54  hours a week. It is the administrative headquarters of the Henry County Library. 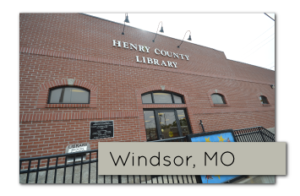 The city of Windsor, Missouri opened its first library in one room of the Baxter Shoe Store on February 4th, 1937. After several moves, the library relocated to the back room at City Hall in 1955 and was officially named the Lenora Blackmore Library after Mrs. T.A. Blackmore, a longtime supporter and original board member of the library. In 2007 the Lenora Blackmore Library became a branch of the Henry County Library. The current location at 105 W. Benton opened on May 29th, 2009. The building is 4,420 square feet and is open 49 hours a week.

The Henry County Library and Lenora Blackmore branch are closed in observance of the following holidays:

The official library page of the Henry County Library and the Lenora Blackmore Branch.

This summer share a good tale with friends! Join in the fun of our summer library program by going to www.henrycolib.org/summer-reading-program/ #summerreading #ReadWithFriends #OceansOfPossibilities #CSLPreads ... See MoreSee Less

Ages 0-5: This age group will only have to read 4 hours on each slip before turning it to redeem on a food coupon or a treasure Box prize! Each slip completed and turned in throughout the summer will ...
View on Facebook
· Share

We can help you whip up something delicious to celebrate #WorldBakingDay 😋🍰 ... See MoreSee Less

On May 16th, 1763, Samuel Johnson met with his biographer James Boswell for the first time. Nearly 30 years later, Boswell would publish his account of Johnson's life.

What would your biography be titled? ... See MoreSee Less

The Henry County Library would like to give a BIG thanks to Institute of Museum and Library Services and Missouri State Library for awarding us a $5,000 #IMLSgrant!

With these funds, we're able to provide our patrons with six new computers that will allow them to have a better and quicker user experience. ... See MoreSee Less

Who's excited for our #summerreadingprogram KICK-OFF EVENT?!?

We sure are! Stop by to pick up information about the #OceansOfPossibilities waiting for you at The Henry County Library.

Don't have a library card? No problem! Sign up with a parent so you don't miss out on all the fun! ... See MoreSee Less

When this happens, it's usually because the owner only shared it with a small group of people, changed who can see it or it's been deleted.
View on Facebook
· Share